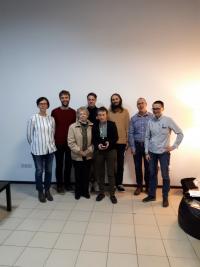 In the face of administrative harassment, the Dotyk festival of queer history took place in Minsk, Belarus, from 6 to 8 April 2018. After six months of planning, at the last minute landlords withdrew access to venues and the organisers scrambled to find substitute premises for the grand opening, conference, and concert. At a café in central Minsk, the Dotyk festival opened in the presence of official representatives of the British and Swedish embassies who expressed their strong support for the Festival and the Belarus LGBT community.

The festival also included a training workshop for local community members on LGBT safety and security, and the presentation of a unique album of LGBT Belarusian culture produced by MAKE OUT, the Minsk community organisation. A copy of the album has been donated to the Bodleian Library at Oxford.

Healey gave a keynote lecture entitled ‘Archive of Freedom or “Gay Propaganda”? Re-reading the Siberian Gay and Lesbian Press of the 1990s’. The research for this lecture drew on the digitised holdings of LGBT media of the 1990s, held in the Moscow Archive of Lesbians and Gays (ALG). The founder of ALG, Elena Gusiatinskaia, and the activist and singer Olga Krauze, presented a panel in conversation with Oxford History DPhil student Ira Roldugina, on gay and lesbian activism in the 1980s and 1990s in Russia.

A nightclub party had to be curtailed when the owners, under pressure from various ministries, cancelling Dotyk’s agreement. (For a statement about the circumstances from Dotyk, see http://en.dotyk.by/official-statement-of-the-iv-international-queer-history-festival-dotyk-2018/)

Nevertheless there was a cultural programme! Dotyk opened with a queer walking tour of Minsk, led by members of the local LGBT community. The festival concluded with a concert of poetry and original songs sung by Krauze in a virtuoso demonstration of the classic bard style of the 1980s-1990s.