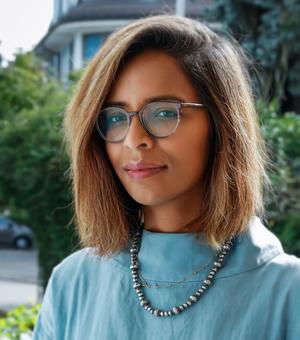 Thiruni Kelegama is a Department Lecturer in South Asian Studies. Working at the intersection of political geography and development studies, her research looks at political and infrastructural transformations triggered by development in the Global South. It builds on a foundation in the political economy of development and deals with the politics of access and territorialisation.

Thiruni’s doctoral work looked at rural focused, nationalised and securitised efforts at development and how these efforts were used to define postcolonial Sri Lanka through ethnographic and archival work. Supported by the Humer Foundation for Academic Talent (Austria) and the Swiss National Science Foundation (SNSF), her research explored how development schemes produced different forms of violence in the struggle for territory, during and after the civil war in Sri Lanka. She is presently extending this work in her book titled Central Margins: Sri Lanka’s Violent Frontier.

Her postdoctoral work, funded by the Swiss National Science Foundation (SNSF), looks at linkages between development, urbanisation and infrastructure in Sri Lanka. The project looks at how infrastructure becomes a symbol of national development imaginaries, a process and practice of state making, and a vector for the spatial operations of geopolitical power.

Thiruni was previously a Postdoctoral Fellow at the Political Geography Unit, Department of Geography, University of Zurich, Switzerland. At OSGA, she convenes the Option paper “Economic Development of South Asia 1947 to present” and contributes to the Modern South Asian Studies Core Course and Research Methods.