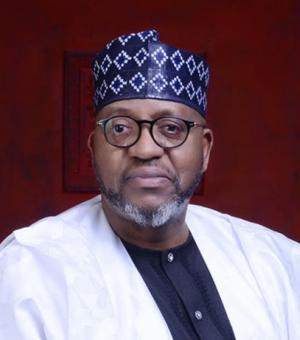 Aliyu Modibbo Umar is an academic and a technocrat from Nigeria. He graduated from California State University Long Beach with Bachelor of Arts Degree in Journalism in 1986. He subsequently enrolled at University of California, Los Angeles (UCLA) where he obtained a Master of Arts Degree in African Area Studies (Motion Picture and Television) in 1988 and Doctor of Philosophy (Comparative Education) in 1992.

Before embarking on his academic pursuits in the United States, Umar began his working career with the Nigerian Television Authority, Bauchi as a News Reporter in 1979. Upon his return to Nigeria in 1992, he was appointed a lecturer at University of Abuja. He was later seconded to the Nigerian Constitutional Conference Commission as a Research Assistant in 1994. After the conclusion of the assignment, Dr. Modibbo Umar was appointed Special Assistant to the Head of State of Nigeria between 1995 to 1999. After Nigeria’s return to civil administration, he was retained in the presidency as a Special Assistant to the President of Nigeria in the office of the Chief of Staff.

In the year 2002, Dr. Modibbo Umar was appointed Nigerian Minister of State Power and Steel. During his short tenure he Initiated and successfully implemented the provision of electricity to 400 rural communities across Nigeria. And worked for coherent policy for steel development and other issues in the mining sector.

In June 2003, He was recalled back to the Office of the Chief of Staff to the Nigerian President and appointed a Senior Special Assistant on Research and Liaison. By the year 2006, Dr. Modibbo was once again appointed the Nigerian Minister of Commerce and Industry.  During his eleven months tenure, he introduced and executed the popular commerce 44 program, which promoted 11 agricultural products, 11 solid minerals, 11 manufactured products for 11 foreign markets. Vigorously promoted patronage of made in Nigeria goods. He was also the leader of the Nigerian delegation to World Trade Organization meetings on the Doha Rounds and other trade issues. He was a leading Participant in the G20 and the ACP and EPA trade meetings where Nigeria's bilateral and multilateral interests in trade issues were discussed and defended.

On the assumption of Umaru Musa Yar’adua as President of Nigeria, Dr. Umar was appointed Nigerian Minister of the Federal Capital Territory, Abuja in 2007. During his tenure lasting 15 months, He recorded of the notable achievements which include the introduction of robust security strategy that ringed neighboring states of Kaduna, Kogi, Niger, Nasarawa, and Benue states in a joint security arrangement. Crime rate reduced by 50% between July and June in 2007/2008 compared to the period in review in 2006/2007. He also initiated free Ante Natal care for pregnant women in the FCT. The project achieved at the end of every pregnancy, a healthy mother and a healthy baby. Continued projects from previous administrations such as; the Light Train System, the Nigerian Cultural Center, Millennium Tower, and Abuja Technology Village.

During his career in public service, Dr. Umar performed these important functions:

SECRETARY: Presidential Committee on the Development Options for the Niger Delta, (1998)

MEMBER: Presidential Committee on the reforms of the Nigerian Civil Service, (2010-2011)

Dr. Umar was a Member Board of Trustees, Baze University Abuja,

He is also the Chairman and Publisher Rariya, a popular Newspaper published in Hausa language which circulates in Nigeria and beyond. The current loyal followers of the paper on Facebook is near a Million.

The Abuja Policy Dialogue Series is an initiative created to harness the pool of retired public servants, academics and entrepreneurs to critically examine and provide policy direction to burning issues in Africa and Nigeria. The areas of focused so far covered are:

During his sojourn at St Antony College as Senior Academic Visitor Dr. Umar will be conducting research and presenting papers in three broad areas namely:

Some selected publications and presentations of Dr. Umar in the past include the following: