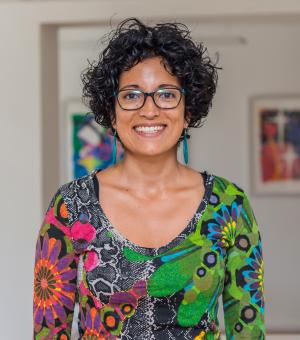 I joined the Centre in September 2018 as a Departmental Lecturer in African Studies. I have just finished a three-year Leverhulme Trust Early Career Fellowship based in the Faculty of Law at University of Oxford. Previously I was a Development Career Lecturer and the Oxford Transitional Justice Postdoctoral Research Fellow at Oxford’s Centre for Criminology. I obtained my PhD in peace and conflict studies from the University of Marburg in Germany where I worked as a research fellow before coming to Oxford in 2013.

I research transitional justice, memorialisation, trauma and witnessing after mass atrocity, with a focus on post-genocide Rwanda. I am  interested in critical theory, research ethics and methodologies.

My Leverhulme project ‘Atrocity’s Archives: The Remnants of Transitional Justice in Rwanda’ adopts a comparative methodology to critically explore how Rwanda’s Gacaca courts and the International Criminal Tribunal for Rwanda (ICTR) produce and affirm particular discourses of peace, politics and trauma. I examine how narratives of atrocity are inscribed onto the archival texts and what role witnesses and evidence collection play therein. I draw on extensive nationwide fieldwork in Rwanda, including unprecedented access to the Gacaca archives and in-depth interviews with former Gacaca judges across the country.

My doctoral thesis adopted a ‘victim-approach’ to explore how survivors of the 1994 Genocide in Rwanda perceive memorials and official commemoration and how they deal with the traumatic experience of survival through these memory institutions and practices. I demonstrate how the practice of ‘care-taking’ – the preservation and care of human remains and dead bodies displayed at genocide memorials in Rwanda – runs counter to official memory politics and yet, at the same time, resonates with the government discourse on the necessity of showcasing physical evidence of a genocide.

I transformed this research into Kwibuka Rwanda, a photographic exhibition that tells the story of ‘care-takers’ working at genocide memorials. The exhibition is housed at the Pitt Rivers Museum until the end of September 2018. It was funded by Oxford’s Public Engagement Seed Fund.

In 2018 I completed an ESRC Impact Acceleration Account project ‘Atrocity’s Archives: The Role of Archives in Transitional Justice’ which brought together archivists and academics from around the world to discuss the role of different types of archives in the search for justice and reconciliation in transition contexts. Together with my partners, swisspeace and the Stasi Records Archive, we produced an online capacity building resource ‘The Archive We Built’ which features archivists explaining their struggles to build and preserve archives in oftentimes hostile and sensitive political environments.

I will be teaching on the MSc African Studies’ core modules and offering an option course ‘Transitional Justice in Africa’ in Hilary term 2019.