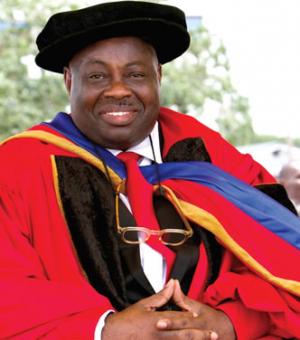 Dele Momodu, born May 16, 1960, is a Nigerian Journalist, Publisher, polemicist, businessman, philanthropist, actor and motivational speaker. He is the CEO and Publisher of Ovation International, a magazine that has given publicity to people from all over the World, mainly in Africa. He is the Chairman of the Ovation Media Group, comprising of Ovation International magazine, Ovation Television and The Boss newspaper.

Dele has received innumerable awards and honours, and has garnered recognition for his work in the world of business, politics, literature, the music industry and the fashion industry in which he plays major roles. Dele writes a weekly article called Pendulum on the back page of Thisday, Nigeria’s most influential newspaper, every Saturday.

Dele Momodu is a graduate of University of Ife, (now Obafemi Awolowo University , Ile-Ife) 1982. Dele holds a degree in Yoruba and a Master's degree in English Literature, 1988, from the same University. Dele Momodu announced his intention to run for the Presidential election of his homeland Nigeria, in 2011 but lost.