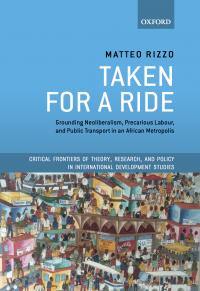 The growth of cities and their informal economies are key characteristic of societies in Africa today. Taken for a Ride contributes to our understanding of both, drawing on long-term fieldwork in Dar es Salaam (Tanzania) and charting its public transport system’s journey from public to private provision. This new addition to the Oxford University Press series “Critical Frontiers of Theory, Research, and Policy in International Development Studies”, investigates this shift alongside the increasing deregulation of the sector and the resulting chaotic modality of public transport. How does public transport work in an African city under neoliberalism? Who has the power to influence its changing shape over time? What does it mean to be a precarious and informal worker in the private minibuses that provide such transport in Dar es Salaam? What are the possibilities for theorising about the urban and economic informality from the streets of Dar es Salaam? These are the main questions that inform this in-depth case study of Dar es Salaam’s public transport system over more than forty years.

Taken for a Ride is an interdisciplinary political economy of public transport, exposing the limitations of market fundamentalist and postcolonial approaches to the study of economic informality, the urban experience in developing countries, and their failure to locate the agency of the urban poor within their economic and political structures. It is both a contribution to and a call for the contextualized study of neoliberalism.

Matteo Rizzo is a Senior Lecturer in Development Studies at SOAS, University of London. Matteo has degrees in Political Sciences from "L'Orientale" (Naples, Italy) and Development Studies and History from SOAS (MSc and PhD), where he also completed an ESRC postdoctoral fellowship. Matteo has taught at the LSE, at the African Studies Centre in Oxford and in Cambridge, where he was a Smuts Research Fellow in African Studies at the Centre of African Studies. Matteo is a member of the Editorial Working Group of the Review of African Political Economy and works on public transport for the International Transport Workers Federation.