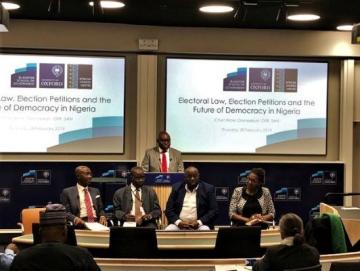 One of the recurrent frustrations of studying Nigeria is the persistence of a few very powerful frameworks, most often about the assumed challenges of diversity and political economy, which seem to recur without modification even as the country itself keeps dynamically unfolding and re-constituting.  So we were pleased to take the opportunity of Nigeria’s 2019 elections for a longer, broader and more thoughtful take on ‘Nigeria in Transition’ – in the social, cultural, political and economic senses of the word.

The day was a showcase for the African Studies Centre’s contribution to the Oxford Martin School’s research programme ‘Governing the African Transition’ which looks at these transitions on a continent-wide basis under the co-lead of Ricardo Soares de Oliveira and Stefan Dercon. The ASC’s contribution is led by three staff members with a strong Nigeria focus: Professor Wale Adebanwi, Dr David Pratten, and I; and the day we held was designed to open up our theme of ‘transition’ to multiple participants who have their own ways of defining those issues.

We were lucky to attract many high-quality submissions from both established and early-career scholars, researchers inside and outside academia, and from Nigeria as well as UK-based researchers. We were also fortunate to be able to involve some high-profile public policy figures who participated in the discussions, including former Minister Dr Aliyu Modibbo Umar, leading publisher and journalist Dele Momodu, and Mallam Bashir Yusuf Ibrahim, of the Peoples Democratic Movement (PDM), a Nigerian political party.

The first panel, chaired by Patricia Daley, looked at Nigeria’s revenue and how it is redistributed. Belinda Archibong of Barnard College, Colombia, traced an economic history of how the tacit bargaining power of civil unrest under military rule affected patterns of resource distribution outside of the constitutional provisions. Neil McCulloch shared a survey of public attitudes which showcased Nigerians’ thoughts on the legitimacy of taxes, and on the legitimacy of avoiding them. My own work traced Nigeria’s move away from oil-reliance to a post-2015 shift to non-oil revenue dominance.  Second was a panel devoted to exactly that issue, the changing role of oil in Nigeria, chaired by Ricardo Soares de Oliveira. Temitope Akinremi’s presentation looked at the sustainability of oil industry supply chains, while Dr Abimbola Agboluaje looked forward instead, predicting how the inbuilt weaknesses and contradictions in the institutions governing the oil sector might be likely to be reproduced in the next dispensation.

The third panel, chaired by David Pratten, covered the territory from public culture to politics, embracing culture in both the sense of communicating meaning, and as a productive resource in its own right. Paula Callus and Charles Gore introduced the ongoing project ‘Artop: The Visual Articulations of Politics in Nigeria’ which brings out the importance of new media interventions such as animation in political campaigning, and in critical activism.  Alex Bud’s work ‘From Razzmatazz to Glamour’ detailed the emergence of a new Nigerian style in interior décor as a window on the economic importance of new style industries. Chimdimma Onah and a team of very impressive postgraduates from Manchester University presented analysis on the impact of twitter in Nigerian politics as seen in the elections of just a few days before, examining how the public, paid hacks and bot software all interact to pattern political communication.

Our fourth panel on consolidation and conflict was chaired by visiting scholar Frank Abumere. Aliyu Modibbo Umar depicted the gradual mixing of administration and party politics in his picture of the transformation of the office of Head of State in Nigeria to a political campaign hub; Patrick Ojo considered elections as necessary but insufficient criteria in political transitions; and Bulama Bukarti & Rachel Bryson documented Nigeria’s approach to deradicalisation in the wake of the Boko Haram crisis and its socially destabilising aftermath.

The day concluded with a move to the Blavatnik School of Government for a keynote from Nigeria’s leading constitutional lawyer, Chief Wole Olanipekun. His presentation on Electoral Law, Election Petitions and the Future of Democracy in Nigeria was timely, as it coincided with the announcement of court challenges to the results of the 2019 elections. Chief Olanipekun’s presentation combined analytical thoughts on the evolution of this trend with the specifics of the legal cases which had informed it, but also a very personal and heartfelt plea for a transition away from this trend which he felt risks de-legitimising political processes.  Kathryn Nwajiaku, Dele Momodu and Mallam Ibrahim discussed the implications in a panel chaired by Wale Adebanwi.

The day was planned as the first leg of a two-leg process, where the second will be a larger workshop in Nigeria later in 2019, as part of our commitment to do more of our work about Africa in Africa, as a way of making the process of intellectual formation more mutual, more embedded, and most importantly, more accessible to scholars based in African institutions. We thank the Oxford Martin School for their continued support and commitment.