A momentous step forward in the partnership between Georgia and the UK took place with the inaugural edition of the annual Georgia-Oxford Forum organised by the Embassy of Georgia to the United Kingdom of Great Britain and Northern Ireland in collaboration with the Oxford University School of Global and Area Studies (OSGA) and Shota Rustaveli National Science Foundation of Georgia. With its multidisciplinary, cross-regional approach, OSGA served as the perfect meeting point for bringing together area experts, government representatives, leading academics, and students from various disciplines to promote and facilitate. 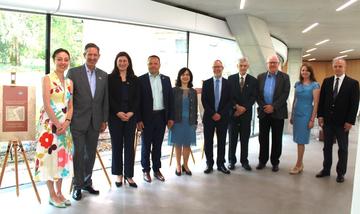 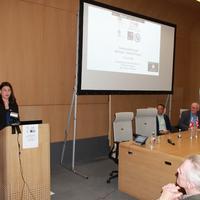 Drawing more than 80 participants, the Forum focused on “Georgia in Europe and the Wider World” and was officially opened by Oxford University’s Head of the Social Sciences Division, Professor Tim Power. The morning panel saw Georgia’s Sophie Katsarava MBE, Ambassador of Georgia to the UK, George Khelashvili, MP, Parliament of Georgia, and Victor Kipiani, Chairman of Geocase reflect on the 30th Anniversary of Georgia-UK Diplomatic Relations, the 9th year of the Wardrop Strategic Dialogue, and the continuing journey for Georgia towards EU and NATO membership with the UK’s Mark Clayton, HM Ambassador to Georgia, and Jonathan Djanogly, MP, Chair of the All Party Parliamentary Group on Georgia. 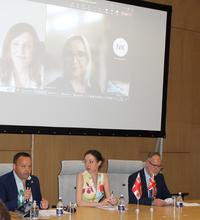 On the theme of education, information, and the Georgia-Oxford partnership, participants were treated to an introduction of the Oxford Georgian Student Society. Following this, our own Professor Dan Healey and Megi Kartsivadze, an OSGA DPhil candidate from Georgia, discussed how we can further leverage academic activity and research to contribute to the promotion of Georgian Studies and Georgia in the UK and beyond with Erekle Astakhishvili, Shota Rustaveli National Science Foundation of Georgia, Tamar Tsuleiskiri, Director of the Information Centre on NATO and EU in Georgia, and Salla Nazarenko, Union of Journalists (Finland), PhD, University of Tampere.

Providing the Forum’s keynote lecture, Professor Neil McFarlane of the Department of Politics and International Relations at the University of Oxford discussed the role of the EU and NATO in promoting Georgia’s integration with Europe. 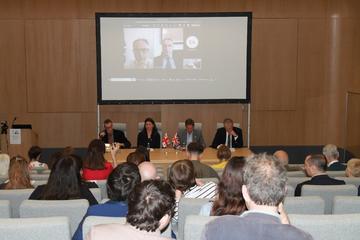 Panel on Georgia as the UKs strategic partner

The final panel of the day reflected on the opportunities of soft diplomacy by bringing to life Georgia’s rich and ancient culture, unique language and alphabet, music and customs. This panel featured OSGA’s Georgian Programme Language and Translation instructor, Lia Chokoshvili along with Rachel King, Curator: European Renaissance and Waddesdon Bequest Department of Britain, Europe and Prehistory at the British Museum, Peter Nasmyth, British-Georgian Society, and Tony Anderson, Author of ‘Bread and Ashes: A Walk Through the Mountains of Georgia’. Concluding the day, participants watched a short film with Gillian Evison, Head of Oriental Section at the Bodleian Libraries, spotlighting Oxford’s particular role with its rich collection of historical documents and manuscripts at the Bodleian Library illustrating diplomatic ties and strong and enduring friendship between Georgia and the UK.

In celebrating a successful conclusion to the inaugural annual Georgia-Oxford Forum, speakers and participants toasted the continuing partnership between Georgia and the UK with Carla Capalbo, an award-winning food, wine and travel writer and author of the book – ‘Tasting Georgia’ followed by Holly Taylor-Zuntz leading the group in traditional Georgian polyphonic singing.

OSGA is proud to serve as the hub for enhancing the partnership between Georgia and the UK and we look forward to building upon the inaugural edition of the Georgia-Oxford Forum with our Georgian colleagues in the years to come.

“The Georgia Oxford Forum was envisaged as the UK platform that would bring together scholars, students, policy makers, NGOs, think tanks, museums, industry representatives and others with shared interests in Georgia, for discussion and debate about the challenges and opportunities facing Georgia today. This inaugural forum, focusing on ‘Georgia in the wider world’ was an outstanding success, attracting more than 80 participants from different sectors and disciplines. What followed was a lively, often provocative, always absorbing, set of discussions that will have percolated ideas, fostered networks and generated further opportunities for and among those involved. A superb day, topped off with Georgian wine and music! Bring on the second Forum!”

"The launch of the Georgia-Oxford Forum is a logical culmination of the successful links that Georgia and Oxford have been enjoying for decades. The forum aims to bring the expertise and knowledge together amongst British, Georgian and international experts, professors, students. We have created a platform, which will further encourage a debate about pertinent topics, global developments and Georgia’s role and standing in this context. The inaugural launch of the Forum was a success and we will continue to work to turn this platform into a consistent format of debating and promoting Georgia, region and bilateral ties amongst academic circles.

I am grateful to everyone who supported this initiative and special thanks to OSGA and the entire team.”

~ Ambassador of Georgia to the UK, Sophie Katsarava MBE